Armed with the voracious sword Frostburn, court slayer Regel Winter once shed the blood of countless foes in service to Orbrin the Winter King.

But even the coldest steel cannot save those Regel loves: his beloved Princess Lenalin, her daughter Semana, and the Winter King himself, felled by treachery five years ago.

Barely an echo of the man he was, Regel forges a pact with the assassin who slew Orbrin, setting out on a deadly quest for vengeance that will change the face of the World of Ruin.

Now available on Amazon! Or on Barnes & Noble! Or see this post for the e-signing directly from me, while supplies last! 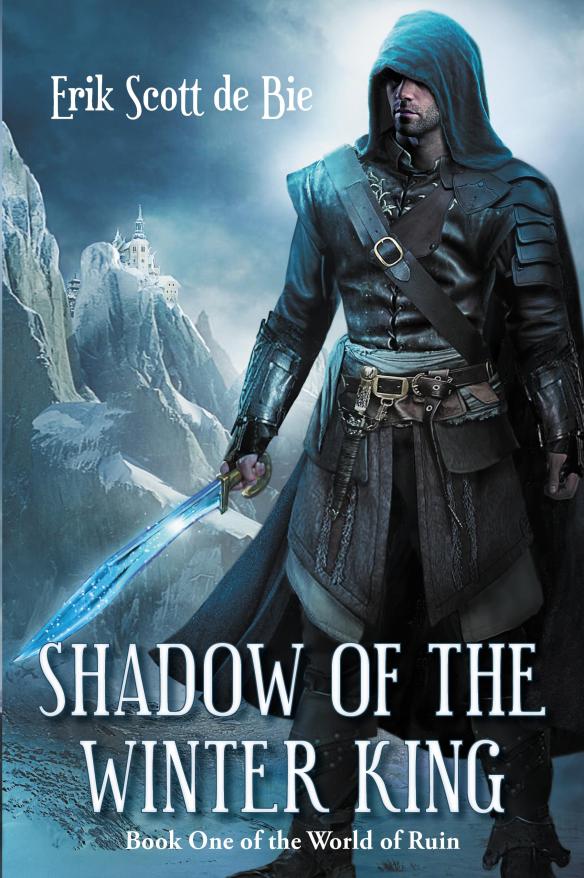 The epic fantasy series begins with Shadow of the Winter King!

The World of Ruin: A Dying World, an Inevitable End

The World of Ruin is a post-apocalyptic fantasy world. A massive magical war ravaged the world millennia ago, and the few humans who survived buried themselves in fortresses hidden beneath the earth. They emerged after centuries set out in the Prophecy of Return to a world full of monsters, barbarians, and hardships. The few civilized men and women erected Mage-Cities that have gradually fallen, one by one, to the ravages of Ruin, until finally only one remains: Tar Vangr, the City of Steel. It stands in the frozen north, a last bastion of civilization against a world on the verge of collapse.

I describe the setting as Game of Thrones meets Fallout by way of Assassin’s Creed: epic, full-metal fantasy in a broken world spiraling into its own doom, torn apart by political rivalry, besieged by death-mad barbarians, and polluted by the irresponsible use of magic. It is a new dark age in the making, and one that is not so far from our own world.

The Winter King’s infamous shadow, Regel is an aging warrior made bitter by loss and injustice. He has watched helplessly as the broken world has stolen his great love and then his first and best master, and now Ruin seems irresistible in its drive to destroy his  life. Then Ovelia appears–one last ray of hope, bound up in shackles of longing and hatred and regret–and he jumps at the chance to make something right for once in his life. (Read more of his background in “Oathbreaker,” my entry in the When the Hero Comes Home anthology.)

Regel was once known for the darkly powerful sickle-like sword (or “falcat,” as the style of weapon is known in the World or Ruin) that he carried into battle: Frostburn, a blade touched with the essence of the endless winter. It hungers for the warmth of the living, feeding from them and from its wielder in equal turn. The blade has not been seen since the fall of Winter, but its destiny is closely tied to Regel’s own.

Proving worthy of a name is the mark of a powerful, important person, and many people have multiple names. Regel has been known as Shadow, Winter, Frostburn, Oathbreaker, and most recently as the Lord of Tears.

A study in opposites: sworn defender and yet murderer, tempestuous warrior and calculating agent, a child of both the honorable winterblood and the passionate summerblood. Ovelia was the tireless guardian of her beloved Lenalin Denerre, daughter of the Winter King, but could not protect her from Ruin’s embrace. She channeled her devotion to protecting Orbrin (Lenalin’s father) and Semana (Lenalin’s daughter), but she surprised the kingdom by slaying Orbrin in a night of treachery and blood. Most thought she perished the same night, but the last heir of Dracaris is not so easily dispatched.

Ovelia wields an ancient ensorcelled blade called Draca, which both consumes magic–burning it away like so much fuel for its inner fire–and warns of impending danger. It leaks shadows that take the form of attackers, so that a wielder who knows how to read the magic cannot be taken by surprise. The blade is the Bloodsword of the Dracaris, Ovelia’s hereditary legacy: its magic is tied tightly to her bloodline. It is said that in the hands of a true heir of the dragon, Draca cannot be outmatched.

Known as the Bloodbreaker for having ended the Blood of Winter, Ovelia will stop at nothing to achieve her aims, whatever the cost.

(Read more about Ovelia in my forthcoming story in the WOMEN IN PRACTICAL ARMOR anthology, “King’s Shield”–coming April 2016!)

A deadly and enigmatic sorcerer, Mask has a long and bloody past drowned in corpses. He is a collector of ensorcelled artifacts and relics of ancient Calatan and, indeed, of the old, fallen World of Wonders. He sells his services as an assassin, known for massive collateral damage and making a significant statement with each of his slayings. At the same time, he serves himself first and foremost, and always considers his every action with great care. He has been active for decades and has killed hundreds of people (see one of his adventures in “Hunger of the Blood Reaver,” my story in When the Villain Comes Home).

His body is frail–almost skeletal–and wrapped tightly in black leather at all times, from head to foot without a single thumb’s breadth of exposed flesh. He wields powerful magic in a number of relics he wears, including a fire casting gauntlet, a glove empowered with telekinesis, and his terrible mask, which produces life-rotting magic called Plaguefire.

If Mask has ever worn another name, it is not known.

Author favoritism: And while I love all my characters, Mask is clearly my favorite. I think you’ll see why. 🙂

SHADOW OF THE WINTER KING is available from Dragonmoon Press on e-readers and print-on-demand!

E-Signing for Shadow of the Winter King (link forthcoming!)

Great fantasy stories are less about dragons and castles and spells than they are about great characters, people who leap into life off the page and make us care about them, and want to know what happens next.
Then the magic swords and sinister castles, the skyships and pirates and dark secrets become delicious icing on the cake.
SHADOW OF THE WINTER KING has all of these things, and witty repartee, and web upon tangled web of intrigues, and a desperate fight for the future of a darkening world, too. Or rather, lots of fights.
Or to put it another way, this one has it all. And a generous handful of characters I want to meet again, in many sequels to this one.
Lovers of fantasy, this one’s a new epic.

SHADOW OF THE WINTER KING reminds me a bit of Rothfuss’s THE NAME OF THE WIND. Both are complex ruminations on political and personal duty, which are more realistic than cut-and-dried good-versus-evil stories . . . The world-building is superior, the narrative moves forward with good momentum, and the story regularly poses interesting questions.

de Bie has taken off his gloves and delivered a great story that captivates the reader. We become invested in the characters early on, and care about the direction the story goes. There are no “safety” features wherein we, the reader, know certain characters are “safe” because they don’t belong to the author. Here, the dialog between characters is crisp yet the prose isn’t overwrought with jargon. Although I am a fan of “A Song of Ice and Fire,” Martin’s work can be as difficult as Tolkien at times. However, Shadow of the Winter King has none of that. The combat scenes are memorable in that they’re concise, gripping, and brief.

The main thing I loved about this book was how impressively balanced everything is. Whether is was the use of magic, an action/fight scene, a sex scene, a flashback, a plot twist, etc. everything seems to come at just the right moment and I never once felt like there was to much of something.

Fascinating story. You have flawed characters, very flawed relationships, all enveloped in a dark world and complex story lines. If you could add a few more story lines, this story could rival any epic fantasy out there.

Dark, complex fantasy with an excellent backdrop of a menacing, dangerous world that seems on its last legs. I really enjoyed this book…

Hold on and don’t blink, you don’t want to miss anything in this book. Really great story, fresh characters. Love knowing I’m not going to be reading the same old crap with Erik Scott de Bie.