This is such a good piece about the sad, blissful ignorance of the alt-right–and the rude awakening they are having:

On the Milo Bus With the Lost Boys of America’s New Right, by Laurie Penny

As a young man, I thought I understood the world, and I was angry and selfish and self-righteous. I could have been one of these lost boys, but I eventually chose empathy, not hate. I met people with different perspectives and backgrounds than mine, and I respected them as teachers, rather than dismissed them as threats. I chose to grow up.

I cannot help but be saddened by this. Not out of sympathy: these pathetic man-children have chosen their path, whether out of ignorance about the consequences and/or desperation to cling to their unearned privilege. No, I am saddened out of empathy. I feel their desperation and their hurt and their overriding confusion, because I have known these things. But where adults can confront these things and find a way to live with them, the alt-right simply rejects them and refuses to participate, to their downfall and the detriment of us all.

Most of us climb the mountain of adulthood: a perilous, tedious journey, at times easy and relaxing, at times steep and smooth, at times slick and treacherous, at times seemingly impassible. We keep at it, working to find alternative routes, and we reach down to help those who are struggling to climb below us. Some people have better equipment with which to make the climb, or an easier route laid out before them.

By contrast, the alt-righters jump right off the cliff the second it becomes even remotely challenging. They think someone saying something even remotely negative must be a true test, because they have never faced anything like real persecution or oppression. They never even get to the hard stuff, and thus they forgo the added strength and stamina that comes with challenge, much less the rewards of having conquered the mountain. They stand there at the base of the mountain screaming invectives up at us, because they don’t have the self-respect to try and climb.

They entertain fantasies about what life will give to them, but they don’t have the skills or interest needed to work for such things. They stand for nothing and have nothing. They have chosen lives that mean nothing.

These awful people are damaging themselves and damaging our country. I can see the shared parts of the path we walked, and thankfully, where we diverged, I chose the right path, while they took the alt-right path: perhaps less traveled by, but for a reason. Because it goes nowhere good.

Their chosen path way leads not to freedom (from consequences, from responsibility, from aging), but to oppression (of the less powerful, of everyone, and ultimately of themselves).

They are lost, and if they are fortunate enough to have the skills needed to find their way, they don’t bother looking. Instead, they just languish in their ignorance, expecting the mountain to bow down for them, so they don’t have to exert themselves in the climb.

That isn’t how life works, and by the time they learn that, it will likely be too late.

So I’m early on in playing the Witcher 3 (great game, etc), and I’m doing this quest called “Precious Cargo.”

In White Orchard, Gerald runs into this “merchant” with a bow who claims monsters spooked his horse, which ran off the road into the swamp. He’d like it ever so much if I found a strongbox on the lost cart and returned it to me. And he’ll reward me.Fine, it’s what I do.

Head into the swamp, kill some drowners, did the cart and a dead horse. Only I *also* find a dead cart driver with an arrow through his neck. I grab the strongbox (covered in human blood) and head back to the bowman, er, merchant.

I tell him he’s a terrible liar, and clearly he killed the cart driver himself, and he tries the whole “look oh behind you” trick, complete with shifty eyes. Geralt being Geralt, I don’t bat an eye but instead cross my arms and say “there’s nothing behind me. I’m a Witcher. I’d have heard it. Just like I can hear your heart pounding. Like a liar’s.” He runs off, and it’s set for a kind of cool horse chase scene.

Only here’s the thing: when the cut scene is over, I’m suddenly being attacked by a pack of wolves! They’ve surrounded me, and by the time I cut them down, the bowman has made good his escape. 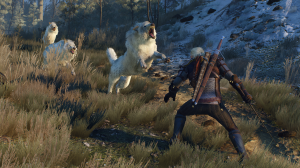 So maybe those Witcher senses aren’t all they’re cut out to be, because apparently there WAS something behind me.

Was that archer the REAL White Wolf?