So here’s my *in-progress,* *first draft* of my FR Randomized Identity tables. This takes into account how I view the Realms and also the novels and stories and games I’ve consumed.
This is for when I’m building an NPC on the spot, usually an NPC adventurer (hence the inclusion of the class and background columns)–or if you want the full experience of being born with no control over how you’ll turn out, you can roll on the table, potentially offering an interesting experience analogous to how people in our world deal with their identity.
FR Randomized Identity
But the most significant part of this table (other than how common fighters are compared to bladesingers, for instance, about 20x as common) is the bit about sex, gender, and orientation.
Looking at sex-assigned-at-birth shows that most members (90%) of humanoid species are assigned either male or female at birth (with a slight imbalance favoring female people), but fully 8% of people in the Realms are intersex, and 2% of people are naturally shifting (as in their physiology literally changes).
When we get to gender identity, though, my Realms’ rate of cis people is only 70%, with genderfluid being 10%, trans being another 10%, nonbinary 6%, and agender 4%.
In my realms, it has always been the case that bisexual/pansexual is the *most common* sexual orientation, considering the panoply of creatures of various gender orientations in the Realms. On my table, you’ll observe it’s about 40% likely. Comparatively, about 15% of the population is heterosexual (that is, mostly or only interested in a different gender than their own) while about 15% of the population is homosexual (that is, mostly or only interested in a gender that matches their own). People view those orientations as interesting and unusual, without any stigma about it–in the realms, you like what you like.
That leaves 30% of the population who are omnisexual (defined here as “attracted to a wide variety of not necessarily compatible beings), demisexual (“attracted to certain beings under certain circumstances”), and asexual (“not sexually attracted to any beings) in just about equal numbers.
That is to say, 10% of beings in the Realms are omnisexual, 10% are demisexual, and 10% are asexual. Dramatically higher rates than what’s reported in our own world, but hey, that’s the Realms for you.
Finally, when you get to races, classes, and backgrounds, you are most likely to be a human (27%) fighter (20%) or wizard (18%) or possibly a cleric (10%) or rogue (10%). Your chances of being a drow (2%) are nearly as low as being a deep gnome (1%) or a Yuan-ti Pureblood (1%), and slightly lower than being a tiefling of some extraction (3%). Half-elf is a full 10% (half the chance of being a human). The rarest classes are Bladesinger, Diviner, and Thaumaturge, but Wizard itself has an 18% (it’s just split among the various schools).
At 9%, soldier is the most common background, while you have only a 5% chance of being a knight, while it is only 2% likely that you will be a noble (either of the Noble background or the Waterdahvian Noble background). I thought that was a fairly reasonable spread. 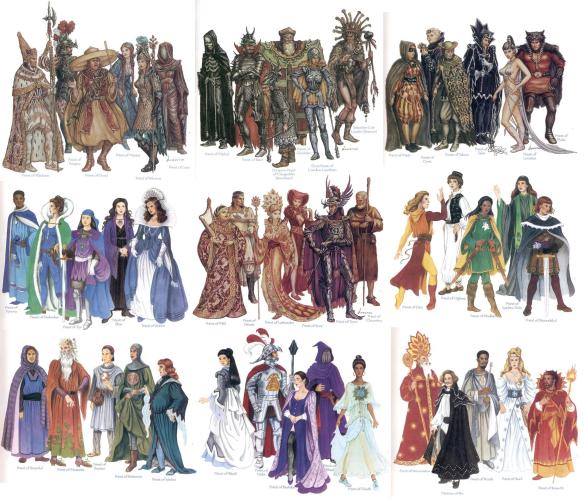 Pretty sure these are all priests, but you get the idea. Copyright (c) TSR

As I said, this is a WORK IN PROGRESS, and I would be most pleased to receive some feedback on this, particularly regarding terms and concepts. Feedback very welcome.